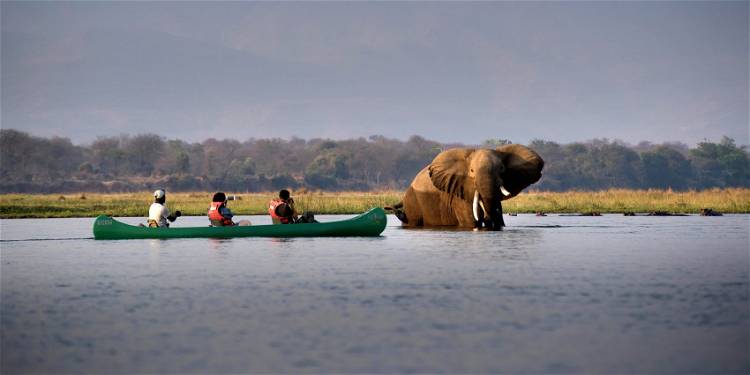 Experience the natural wonders of Zimbabwe on this ten-night family safari holiday, staying in some of the country's most beautiful camps and lodges. You'll begin in Victoria Falls, before observing the incredible wildlife of Hwange National Park, Lake Kariba, Matusadona National Park, and Mana Pools National Park.

Call us for itinerary price

You'll board a flight to Cape Town, from where you'll catch a connecting flight to Victoria Falls in Zimbabwe. Upon arrival, you and your family will be collected and taken to The Elephant Camp by one of the camp's representatives.

In an unrivalled location overlooking the Zambezi Gorges, The Elephant Camp is a gateway to Africa's iconic Victoria Falls, featuring an on-site spa, restaurant, and a selection of luxury suites. Staying in a Family Luxury Tented Suite, you'll benefit from a private plunge pool, spacious deck, and standalone bathtub.

During your stay at the lodge, you'll experience the might of Victoria Falls as you visit several viewing points overlooking the cascading flow of water. One of the Seven Natural Wonders of the World and a UNESCO World Heritage Site, a visit to Victoria Falls will be memorable for the whole family.

The following day, you'll explore the vast wilderness of the Victoria Falls Private Game Reserve on a guided game drive, witnessing Africa's "Big Five" as well as an abundance of birdlife. The Reserve boasts its own resident pride of lions, as well as a healthy leopard population, with sightings of both species of big cat common during safaris through the park. A number of elephants have also made the Reserve their home, and you'll also find plains game such as buffalo, giraffe, zebra, impala, sable, and eland.

After your time in Victoria Falls, you'll now begin the journey to Zimbabwe's Hwange National Park. You'll be taken by private car transfer to Victoria Falls airport, before boarding a light aircraft to Manga Airstrip. On arrival, you'll be met and taken to your next accommodation: Somalisa Acacia Camp.

Situated on the edge of an expansive floodplain in the Hwange National Park, Somalisa Acacia Camp is in a prime location for wildlife viewing, and is ideal for families and larger groups. Staying in a Two-Bedroom Family Unit, you'll enjoy communal meals in the camp's mess deck, feeling refreshed in the outdoor pool, and daily game drives into the national park.

Embark on game drives through Hwange National Park, the largest game reserve in Zimbabwe, and have the opportunity of spotting animals including elephants, buffaloes, giraffes, lions, leopards, and wildebeest. Hwange National Park is home to over 100 species of mammal, giving it the largest diversity of mammal species of all the world's national parks, as well as being home to a whole host of bird life, including over 500 avian species.

For the little ones on a safari, the camp's Ngwana Club is the perfect place to ensure that every member of the family is entertained. With activities including nature walks, storytelling, cultural arts, and cooking classes, your children will be both entertained and educated throughout their stay.

After being collected by private car transfer and taken back to Manga Airstrip, you'll board a light aircraft to Lake Kariba. Upon arrival, you'll meet a representative of Bumi Hills Safari Lodge, who will relieve you of your luggage and transfer you to the lodge in the comfort of a private vehicle.

Marvel at the beauty of Lake Kariba on a sunset cruise, where you'll listen as the natural surroundings come to life whilst learning more about the world's largest man-made lake.

The following day, you'll have the opportunity to explore the lake's vast eco-system in depth, from game drives in Matusadona National Park (which borders the lake) and boating safaris on Lake Kariba itself. Before the lake was created, Matsudona was a vast, rugged wilderness with limited access. The lake brought significant ecological changes and helped to greatly increase the populations of large mammals, particularly elephant and buffalo. Healthy populations of waterbuck, antelope, zebra and even impala guarantee the presence of predators such as lion, leopard and cheetah, which are all plentiful.

After your stay in Lake Kariba, you'll now head to Zimbabwe's Mana Pools National Park. After being taken by private car transfer back to the airport, you'll fly to Mana Main for a three-night stay at Nyamatusi Mahogany.

An intimate safari lodge with only two tented suites and two family suites, Nyamatusi Mahogany is in an ideal location for exploring the Mana Pools National Park, situated on the banks of the Zambezi River. The lodge features a plunge pool, communal dining area, and daily excursions into the natural surroundings, including game drives and canoeing.

Known for its vast flood plains and abundant wildlife sightings, you'll explore Mana Pools National Park on game drives and a walking safari. The park's 2,500 sq km of river frontage, islands, sandbanks, and pools, flanked by forests of mahogany, ebony, and baobab, is one of the least developed national parks in Southern Africa. It also boasts Zimbabwe's largest concentration of hippopotami and crocodiles, as well as rich populations of mammal during the dry season, including zebra, elephant, and Cape buffalo.

With your stay at the lodge, you'll have the opportunity to go canoeing on the Lower Zambezi River, observing elephants as they bathe in the water and bloats of hippos as they move along the river. The river's banks also draw an impressive array of birdlife, with over 380 avian species recorded throughout Mana Pools National Park.

Your time in Zimbabwe has come to an end. After boarding a light aircraft back to Victoria Falls, you'll board a flight to Cape Town, from where you'll catch your connecting flight to the UK.

Call us for itinerary price

Itinerary includes:
Trustpilot
Speak to one of our experts to find your perfect trip!

Trustpilot
Speak to one of our experts to find your perfect trip!