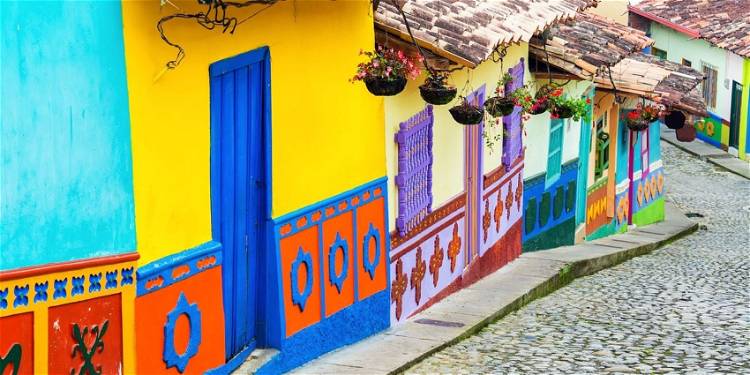 Bold, colourful, and vivacious, Colombia has something for everyone, whether that be exploring its historic cities, tasting world-class coffee, or relaxing on its tropical Caribbean coastline.

Our luxury Colombia holidays will take you everywhere from the bright streets of Cartagena to the tropical beaches of the Rosario Islands. Bogota, Colombia’s vibrant capital city, encapsulates both the country’s rich history and ever-evolving modern identity; it is in the historic neighbourhood of La Candelaria that you can experience Colombia’s colonial era, visiting 17th-century landmarks and the impressive Gold Museum, exhibiting over 50,000 gold relics from pre-Columbian cultures.

Visit Colombia’s hilly coffee region and tour a working plantation to observe the coffee process from start to finish, or head to Cartagena and admire the colourful colonial architecture decorated in fragrant bougainvillea. For nature enthusiasts, the southern city of Leticia is Colombia’s gateway to the Amazon; it is from here that you can head to Amacayacu National Park, home to nine species of primates, and embark on boat tours along the Amazon River. Travelling further north, you can hike in Chiribiquete National Park, the world’s largest tropical rainforest park, known for its rich biodiversity and indigenous rock art.

Escape to tropical beach paradise on Colombia’s Rosario Islands, located in a pristine archipelago about an hour’s boat ride away from Cartagena. Characterised by their idyllic white-sand beaches, turquoise waters, and flourishing marine life, the islands are distinctively Caribbean, particularly ideal for snorkelling and scuba diving.

Colombia is generally an all-year-round destination, though the weather varies region to region. The lowlands benefit from a tropical climate throughout the year, whereas the highlands can see cooler temperatures. The most popular time to visit is during the dry season, which falls between January and March, where you can expect warm and sunny weather. As a rule of thumb, we would recommend that you avoid the rainier months of September, October, and November.

Colombia: Off the Beaten Track

Travel through vibrant cities, enigmatic ancient ruins and the enchanting Amazon this 10-night itinerary across Colombia...

Experience the best of Colombia on this 14-night itinerary taking you across vibrant cities, historic towns, tropical islands and untamed wilderness...

Best Time to travel to
Colombia

Colombia is generally an all-year-round destination, though the weather varies region to region. The lowlands benefit from a tropical climate throughout the year, whereas the highlands can see cooler temperatures. The most popular time to visit is during the dry season, which falls between January and March, where you can expect warm and sunny weather. As a rule of thumb, we would recommend that you avoid the rainier months of September, October, and November.

Things to do in
Colombia
Coffee Region

Visit Colombia's famous Coffee Region, a scenic region containing some of the finest coffee plantations on the continent. Dotted with pueblos, a tour through the region will allow you to sample some of the finest coffee in the world while learning about the many traditional methods used to cultivate and harvest coffee. When you're not sipping coffee, you can experience everything the region has to offer, from hiking the lush Valle Cocora and relaxing in the hot springs of Termales San Vicente to exploring the region's renowned culinary scene, where you'll find an assortment of restaurants serving local cuisine.

The Rosario Islands are an archipelago of 27 beautiful islands located off Colombia's Caribbean coast, a short boat journey from Cartagena. The islands, which have been designated as a national park, are known for the vast diversity of marine life and the abundance of coral reefs that fill the crystal-clear seas that surround them. Fringed by white-sand beaches, the islands are perfect for a tropical retreat, ideal for a relaxing holiday filled with fantastic opportunities for marine exploration.

Discover Colombia's extensive collection of pre-Colombian relics in The San Agustin Archaeological Park, home to South America's largest collection of religious monuments and megalithic sculptures. Located just six hours away, The National Archaeological Park of Tierradentro is another hub of ancient structures with over a hundred underground tombs dating from the 6th century, providing a vivid look into the ancient practices of the enigmatic Andean society that once inhabited the region.

Known as the 'River of Five Colours', Cano Cristales is one of Colombia's most awe-inspiring natural wonders. Located in the mountain range of Serranía de la Macarena, the river gets its colours from an endemic red plant species, black rocks, green algae, blue water and yellow sand, creating an iridescent and mesmerising spectacle.

Located in the Andes Mountain range, El Cocuy National Park is characterised by towering snow-capped peaks, soaring glaciers and crystalline mountain lakes. Ripe for exploration, the park is paved with a number of hiking trails showcasing the spectacular beauty of the region. One of Colombia's less explored regions, the park is sure to enchant all who visit.

Travellers seeking to venture off the beaten path will undoubtedly be in awe of the Tatacoa Desert situated north of the Huila Department. Known for its surreal, unearthly appearance, the desert is a vast, barren landscape of red and grey plains studded with cactus'. Remote and secluded, the desert is ideal for star-gazing, with little light pollution disrupting the skies. Travellers to this fascinating region can enjoy exploring the landscape on hiking and cycling excursions.

The starting point of your journey into Colombia's portion of the Amazon, the city of Leticia is located on the left bank of the Amazon River in Tres Fronteras, the boundary point between Colombia, Brazil and Peru. A rising eco-tourism destination, the city offers accessible links to a variety of national parks and reserves along the Amazon River where visitors can enjoy a number of explorative activities, including hiking through the jungle, drifting down the river on birding excursions and spotting the vast diversity of flora and fauna that inhabit the region. While travelling through the Amazon, visitors are likely to encounter the various indigenous communities that reside here, including the Witoto, Inga, Tucano, Ticuna, and Nukak, a rare opportunity to intimately embrace the wealth of culture of the region.